Consider the parsnip. Sweet. Nutty. recipe. From fritters (recipe) to soup (recipe), homemade gnocchi (recipe) to curry (recipe), the mighty parsnip delivers folate, vitamin C, fiber and flavor. Even if you’ve never before tasted parsnips, my bet is that if you try one of these recipes, you’ll not only want more parsnips, you’ll want to grow your own (tips on that below).

Speaking of yum, here’s a recipe from Simple Organic Kitchen & Garden that I’ve adapted to fit the items in my pantry, notably dried tomatoes and porcini mushrooms. The original recipe is known as Parsnips and Chickpeas in Garlic, Onion, Chili and Ginger Paste. I added ingredients, skipped a couple others and decided to shorten the title to the equally descriptive Parsnips Piquant. 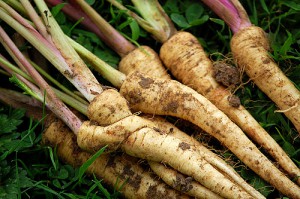 The parsnip’s full flavor emerges after the plant has been exposed to near freezing temperatures, thus this root crop is considered a winter vegetable. Here in Colorado where we redefine cool, if not winter, a person may scoff at the very idea of growing a slow maturing vegetable. But parsnips are the only root crop that can survive in the ground all winter. Indeed, it is one of the few crops with which high elevation gardeners might achieve success. (source)

According to Shane Smith, in his book, Greenhouse Gardener’s Companion, parsnips require bright light, cool temperatures and may go to seed if overwintered. So you might wonder if I’ve slipped a cog when I mention that I grew two small patches of parsnips last winter in our attached passive solar greenhouse and that both test plots were partly shaded and further  that one of the beds regularly reached air temperatures above 87 F.

However, if I mentioned that I fully intend to seed parsnips again for Colorado’s less industrious, though longer, growing season (AKA winter), you might want details regarding these attempts. You are in luck.

I planted one batch in early August for inclusion in December’s root crop rich menus. This first sowing was in the raised bed nearest the southern greenhouse vent, which is the bed furthest from the main house’s southern wall and which is largely shaded in winter, thus the coldest spot in the greenhouse. The soil does not freeze, though air temps do occasionally reach the mid 30s. The parsnips we harvested from this test plot were every bit as large and straight and lovely (not to mention sweet) as those we’ve purchased in the store.

In addition, I grew a dozen parsnips in the west wing. This second test plot is within three feet of the main house’s west wall. The bed receives afternoon sun, which in the winter months, means that air temperatures reach the nineties, but soil temperature remains between 50-65 F. In addition, overnight air temps are generally a few degrees warmer than those in the first plot. We planted the second crop of parsnips in mid-October and harvested them in late January. They were two-thirds the size of the others, but possessed incredible flavor. Parsnips from this plot are featured in the images of Parsnips Piquant, above.