Translated into English and adapted by Jonell Galloway

I risk sounding like a schoolteacher (or a wine snob), but I shall continue. My hair stands on end when I hear people confuse Champagne and Spanish cava, or bubbly (I hide my annoyance, of course). 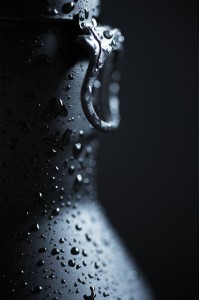 I can no longer maintain my silence, so I will hastily scribble out a few lines to remove all doubts about the difference between cava and Champagne, and you can face up to the test. You only have to worry about perhaps finding yourself at a blind tasting with people who always know how distinguish one from the other, who never get it wrong. Otherwise, you’re set to roll.

END_OF_DOCUMENT_TOKEN_TO_BE_REPLACED

A good meal ought to begin with hunger.–French proverb

The belly is ungrateful – it always forgets we already gave it something.–Russian proverb

END_OF_DOCUMENT_TOKEN_TO_BE_REPLACED

This past weekend, we got much needed rain. It was a welcome relief to the parched hills and landscape around us. All day long dark clouds played hide and seek, and brought spurts of heavy showers, at times accompanied by loud winds. I sat at my kitchen window observing nature’s enormous beauty. Washed in the rain, it had come alive.

END_OF_DOCUMENT_TOKEN_TO_BE_REPLACED

Butter is gold in the morning, silver at noon, and lead at night.–English proverb

END_OF_DOCUMENT_TOKEN_TO_BE_REPLACED

More than twenty years ago the King of Thailand was about to celebrate a landmark birthday, so he and his government planned a long list of special events and invited expatriate Thais from prominent families to return home and join the celebration. Yao, a Thai friend of mine was among the invitees. I went along.

“Let’s go find some durian, you know – the stinky fruit,” she proclaimed with a smile. I returned her smile with a little apprehension. I was usually impervious to all varieties of natural and synthetic aromas. Not so that Sunday in Bangkok. My diminutive soft-spoken friend from San Francisco was on the home turf of her family and her childhood. She was my guide for the day. Her feather-like hold on my arm steered me through the bustle of the Sunday crowds. There, at the weekend market on the edge of the city, thousands of shoppers gathered to buy everything from plaid boxer shorts and eyeliner to hundred kilo live pigs. We were on a durian quest.

END_OF_DOCUMENT_TOKEN_TO_BE_REPLACED

How thrilling to be interviewed by Gourmet Live!

Only from your own table can you go away full.–Jewish proverb

END_OF_DOCUMENT_TOKEN_TO_BE_REPLACED

The macaron is a desert of legendary proportions, which easily transcends the cookie genre. Technically, it is simply a pastry, in which two shells made from ground almonds, egg whites, icing sugar and sugar encase a delicate filling flavored with a symphony of different flavors. In reality, its finesse goes far beyond that of cookies.

It is believed that macarons made their way to the French court from Italy with the chefs of Catherine di Medici who married King Henry II of France in 1533. This dessert of all desserts really came into its own in 1792 when two nuns seeking asylum in Nancy during the French Revolution baked and sold macarons to support themselves and became known as the macaron sisters! At that time, the macaron was just plain pastry no flavor and no filling.

It was not until the 1900s that Ladurée‘s Pierre Desfontaines revolutionized the macaron by taking two pastry shells and filling them with ganache. Today, besides Ladurée, there is, of course, Pierre Hermé, both whom have elevated the macaron to new heights and made them celebrated.