From the archives, in celebration of Nancy Singleton Hachisu’s new book Japanese Farm Food, already on its way to becoming a classic

Just moments before the Great East Japan Earthquake began to shake I was thinking about food. 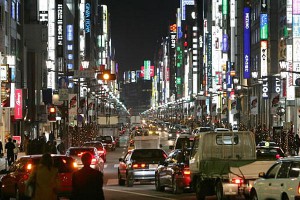 While making my way towards Tokyo Station to catch the bullet train back to my local area 100 kilometers northwest of Tokyo, I was toying with dropping by my regular sushi shop near Tokyo Station for a palate cleanser (to chase away a disappointing sushi lunch earlier). Though really, I was wishing I could stay in town for dinner. Alas, I knew this would not sit well with my husband as I had just gotten back a couple days earlier from a quick trip to the U.S. And I had been gone way too much this last year.

That morning I had sat in on a brain storming session exploring logistics of bringing the next edition of Cook It Raw to Japan. As the talk flowed around me, my nascent desire to “experience” Yoshihiro Narisawa’s provocative Japanese-influenced French “food” swelled into an obsessive urge to eat at his Minami Aoyama restaurant, Les Créations de Narisawa that night. Impractical, crazy, costly…impossible. Or so I thought.

When the ground of the massive station building where I stood stopped rippling and the initial terror had passed, the other passengers and I all waited quietly with backs leaning against the station walls. All eyes were fixed on our cell phones in hand, trying unsuccessfully to get a signal. No one said a word.

I emailed my 14-year-old son, home sick from school that day, and got a return email immediately. The house and family were fine.

At that point I still thought the trains would be running again, because the JR announcements were telling us there had been a “big earthquake,” and to wait as they checked the train lines. I dutifully waited for 45 minutes before realizing it was pointless. And so I made my way through underground walkways to Tokyo Station and began to realize the enormity of what had just happened. 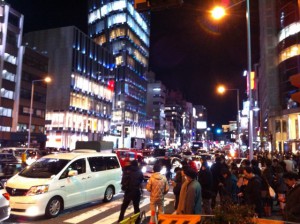 Student groups trapped on their way through Tokyo for the annual School Trip were seated on the floor as teachers gave instructions. The bullet train would not be running that day (or the next).

My first thought was getting a hotel (and that I could stay for dinner). I had already squandered a crucial hour waiting for the trains to run, so the streets had swollen with commuters by the time I surfaced outside of Tokyo Station. I only knew of a few hotels and was not sure which side of the station they were located. Tokyo Station is a massive behemoth spanning multiple city blocks. When I finally got my bearings, it was getting on towards 5pm, already 2 hours after the earthquake. The hotels were full, so I lined up for the payphone to call Les Créations de Narisawa. My iPhone battery was dying, I was getting cold, and I knew I needed to get to a safe haven to recoup my energy before the night ahead of me. I needed food and I needed good food.

It was now about 6pm. I glanced over at the hoards waiting for taxis and optimistically told the restaurant I would try to get there by 7:30, but gave them my email for contact.

I now had a destination and nothing would deter me from getting there. Nothing.

The line for taxis looked insanely long and seemed to feed in from different directions. I dithered. I stood in line for a while, still unable to commit: wait it out or find another way. I tried to gauge how long it would take by talking to others around me in line—I’m not sure what we were thinking. We somehow believed that if we stood there long enough, the taxi would take us where we wanted to go. But what exactly was, “long enough?” One hour…five?

The alternative was unthinkable. Walk.

But I didn’t have all night to passively wait. I had less than 2 hours to get to my asylum away from the massive surge of humanity that had filled the sidewalks and streets. I knew I could handle a night on the floor of Tokyo Station, but desperately needed something to ground me in the chaos. And the only thing that does that for me is a quiet room and thoughtful food.

So I set off walking. Power walking, that is.

Thanks to a fellow “traveler” met early on in my trek, I got to Minami Aoyama in about an hour and a half. We stopped one time on a pedestrian bridge over Aoyama Dori (a main thoroughfare). The vast sea of lights before us was from the cars that barely inched forward. No taxis were getting through that night. Walking had been a good decision.

A flute of champagne in hand, my iPhone charging, I heaved a huge sigh of relief. I was “home.”

For the next two hours, a surreal dinner like I had never had before unfolded. It almost seems obscene in retrospect: tree bark, tree sap…bread baked before my eyes in a small stone capsule. Unusual and whimsical morsels from land and sea played together on the equally fanciful “plates.” I was the only customer that night. Perhaps I was the only one crazy enough to take refuge in such a place. Shut off from the outside world, none of us in that hushed room of Les Créations de Narisawa really knew or understood the gravity of the earthquake and all the horror and devastation it had brought. Nor had any of us imagined the unthinkable happening as it has happened at Fukushima Daiichi. 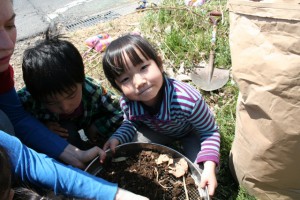 That night at Les Créations de Narisawa, I was caught in a soft little bubble, coddled by the staff. All of us unaware of what awaited us when the bubble burst.

At 10 o’clock, I stepped back out into the brisk night and started my return voyage. Long (useless) waits for trains, a night spent shivering on the marble floor of Tokyo Station, and more endless lines later, I finally got home late the following day. And for now we are safe, though 215 kilometers does not seem far enough from Fukushima Daiichi. But hundreds of thousands of Japanese are still in shelters and many will not be able to go home for many years to come.

And in the aftermath, we try to pick up our lives. I am planting seeds for the summer and looking towards the future. I am trying to organize food for a shelter in our prefecture and to offer a family the vacant teacher apartment at our school, but the wheels grind slowly here and accepting help from outside sources means someone has to manage that. There seems to be an absence of organization to deal with donations and the shelter contacts prefer money or instant ramen over real food like a big pot of stew from farm chickens and local (non-irradiated) vegetables. But that’s Japan, it’s all about the face-to-face meeting, not phone arrangements. I suppose a road trip is in order.