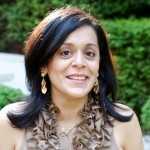 Mutter paneer is an all-time favorite of mine. This popular North Indian dish is often found in Indian restaurants around the world, but nothing compares to the way my mother would make it.

Mutter paneer is basically a flavorful vegetarian dish made of soft homemade Indian cheese called “paneer”, which is lightly pan-fried, then added to a spiced gravy with peas and tomatoes.

I’ve adapted my mother’s recipe over the years and instead of a thin gravy, I have created a creamier version, with an intense, fruity-flavored tomato sauce which coats the soft homemade paneer. 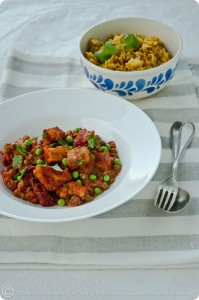 Make your own paneer.

Find out everything about the Indian spice kitchen.

While my mother’s version is based on the classic Punjabi style of making mutter paneer, what I like about my version is that the gravy is thicker and heavily coats the paneer, so each bite of the cheese is accompanied by a plethora of vibrant flavors. Paneer itself is fairly bland and flavorless, but with a rich and full-bodied tasty gravy it adds a heavenly highlight. The sauce itself is fruity and tangy and wonderfully aromatic and must be wiped clean with morsels of rotis.

This is a perfect side dish and can be accompanied by any of your favorite Indian flatbreads. It works well with a creamy butter chicken for a more elaborate meal.