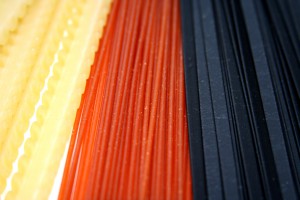 It was always linguini between us.
Linguini with white sauce, or
red sauce, sauce with basil snatched
from the garden, oregano rubbed between
our palms, a single bay leaf adrift amidst
plum tomatoes. Linguini with meatballs,
sausage, a side of brascioli. Like lovers
trying positions, we enjoyed it every way
we could—artichokes, mushrooms, little
neck clams, mussels, and calamari—linguini
twining and braiding us each to each.
Linguini knew of the kisses, the smooches,
the molti baci. It was never spaghetti
between us, not cappellini, nor farfalle,
vermicelli, pappardelle, fettucini, perciatelli,
or even tagliarini. Linguini we stabbed, pitched,
and twirled on forks, spun round and round
on silver spoons. Long, smooth, and always
al dente. In dark trattorias, we broke crusty panera,
toasted each other—La dolce vita!—and sipped
Amarone, wrapped ourselves in linguini,
briskly boiled, lightly oiled, salted, and lavished
with sauce. Bellissimo, paradisio, belle gente!
Linguini witnessed our slurping, pulling, and
sucking, our unraveling and raveling, chins
glistening, napkins tucked like bibs in collars,
linguini stuck to lips, hips, and bellies, cheeks
flecked with formaggio—parmesan, romano,
and shaved pecorino—strands of linguini flung
around our necks like two fine silk scarves.

Diane Lockward is the author of three poetry books, most recently, Temptation by Water. Her previous books are What Feeds Us, which received the 2006 Quentin R. Howard Poetry Prize, and Eve’s Red Dress. Her poems have been included in such anthologies as Poetry Daily:360 Poems from the World’s Most Popular Poetry Website, Garrison Keillor’s, Good Poems for Hard Times, and The Poet’s Cookbook, edited by Grace Cavalieri. Her poems have also been published in such journals as Harvard Review, Spoon River Poetry Review, and Prairie Schooner as well as featured on Poetry Daily, Verse Daily, and The Writer’s Almanac. She lives in northern New Jersey and works as a poet-in-the-schools for both the New Jersey State Council on the Arts and the Geraldine R. Dodge Foundation. You can visit her online at Diane Lockward.