The onion is round.  So is a basketball, a grapefruit, a globe, the moon.
How does the onion’s roundness differ from theirs? —Nancy Willard 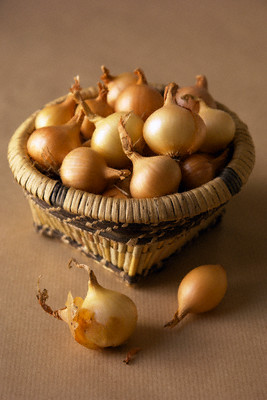 The onion wears a papery sheath.
It is the moon gone to ground,
light enclosed in a brown paper bag,
not really round, but the shape
of the tears we weep when we take
a knife to its white skin.

“Onions,” says the Joy
of Cooking, “are of easy culture.
They prefer moist, rich earth,
sun, and shallow planting.”
It does not say they are the moon’s
long-lost relatives who send up
green spears toward the sun.

The grapefruit, on the other hand,
is a little sun. We cut it in half
and pour on sun-colored honey.
The mixture of sweet and tart
waking our tongues, we rise
from the table feeling lighter.

“Onions are supposed to be the secret
of health,” says the Joy of Cooking.
“But how can they keep that secret?”
In a cool, dark place they sleep
in their papery shells. Giant pearls,
they will be married to mushrooms.
Fire is the priest at this wedding.

Onions, sliced into rings,
do not bounce, do not sail
through the air and into a hoop
looped round with netting as the crowd
cheers and the sun is captured
for another year.

Onions live more quietly
though they may sizzle
in their bath of oil.

The onion is not painted blue
where oceans pulse
or green where continents sprawl.
The globes of my childhood
are all wrong now—the names
of countries changed, borders
redrawn, but where the soil
is moist and rich, onions
still flourish, tiny illumined
globes in the spinning dark.

Nan Fry is the author of two collections of poems, Relearning the Dark, and Say What I Am Called, a selection of riddles she translated from the Anglo-Saxon. Her poems have appeared in many journals and anthologies and in several textbooks. Relearning the Dark won the Washington Writers Publishing House competition in 1991. Her work has also appeared on posters in the transit systems of Washington, D.C., and Baltimore, Maryland, as part of the Poetry Society of America’s Poetry in Motion® Program. She teaches at The Writer’s Center in Bethesda, Maryland.

This poem has appeared in the Innisfree Poetry Journal and The Poet’s Cookbook: Recipes from Tuscany, edited by Grace Cavalieri and Sabine Pascarelli (Bordighera Press, 2009).