The reinvention of French cuisine: it’s springtime for French cuisine, and it may not all be thanks to French bread bakers, but they are playing a major role

French bread bakers are in the limelight these days, and are considered as much artists as artisans. Marie-Odile Briet recently paid homage to their creativity, unbridled by the French government’s 1993 “bread decree,” defining in very precise terms what could and couldn’t be defined as “bread.” The most illustrious advocates of the art of bread making, which in essence had to be reinvented, were Gontran Cherrier (Paris), Dominique Saibron (Paris), Christophe Vasseur (Paris), Jean-Luc Poujauran (Paris), Basile Kamir (Paris), Eric Kayser (Paris) and Benoît Fradette (Aix-en-Provence).

They merit the name of bread baker, or boulanger, as well as inventors. But we mustn’t leave out the stout-hearted artisans, working quietly in their bakeries in the wee hours of the morning, with no one tooting horns for them, who are nonetheless master bakers. And where there’s smoke, there’s fire, and this is the proof of the true renaissance of the French bread making profession — a renaissance that has spread from a few Parisian arrondissements to the entire country. It is a true phenomenon that has spread its wings far and wide; it is a movement that has started a new chapter in the history of French bread making. In this new paradigm, there is no longer any plausible excuse for bad bread, for flavorless bread, for bread that is too expensive or too anything. The movement is quietly deepening its roots, backed by a history dating back thousands of years, basking in the glow of its established nutritional qualities. But that’s not all: these master bakers are now an integral part of the whole redefinition of French cuisine. Bread is no longer considered a humble food to fill your belly or to sop up your sauce. It is clearly in the public eye.

If you’re interested in this renaissance of French bread, here are a few names you absolutely must know, French bakers in Paris, in the rest of France, and even some ambassadors outside France: Michel Izard (Lannilis, Finistère), Alex Croquet (Wattignies, Nord), Jacques Mahou (Tours, Indre-et-Loire), Nabil Sbaï (Reims, Marne), David Bedu (Pistoia, Tuscany, Italy), Pierre Nury (Loubeyrat, Puy-de-Dôme). (Please note place names are listed by town or city, followed by the département or region, and if the baker works abroad, the country is listed last.)

This is just the beginning of our list, because there are just so many talented bread bakers out there. Others will be listed in the next articles in this series. This does not mean they are not as good, that they are in order from best to lesser. It’s simply because we’ve met these bakers recently, because they are in the process of revolutionizing, like many others, each in their own special way, a way that we would like to investigate: the world of bread baking, or boulangerie. In reality, each of these master artisans has made himself known in the world of bread lovers through his very particular talent, his own well-kept secret for making bread, his noteworthy business sense, his almost frenzied taste for innovation, and sometimes even his true and rare mastery of the interminable, slow process of fermentation. If we are to look at them more closely, it is through this original talent or gift or vision they have offered to the entire world of bread making, and that only they can convey.

Franck Debieu‘s contributions to the world of bread baking are undoubtedly many, but it is perhaps more suitable here to focus on the most original aspects of a project he’s been working on since 2002. This project is distributed among his three bakeries, all called L’Etoile du Berger, in Sceaux, Fontenay aux Roses, and Meudon Bellevue, suburbs just south of Paris. On our visit to the Sceaux bakery on February 22, 2011, we had a long, detailed discussion with Franck that could rightly be placed in the domain of a “coaching” session inside the oven room and the bakery shop extending from the oven premises. It was this experience and the rich exchange of ideas that took place that served as food for thought for this series of articles. 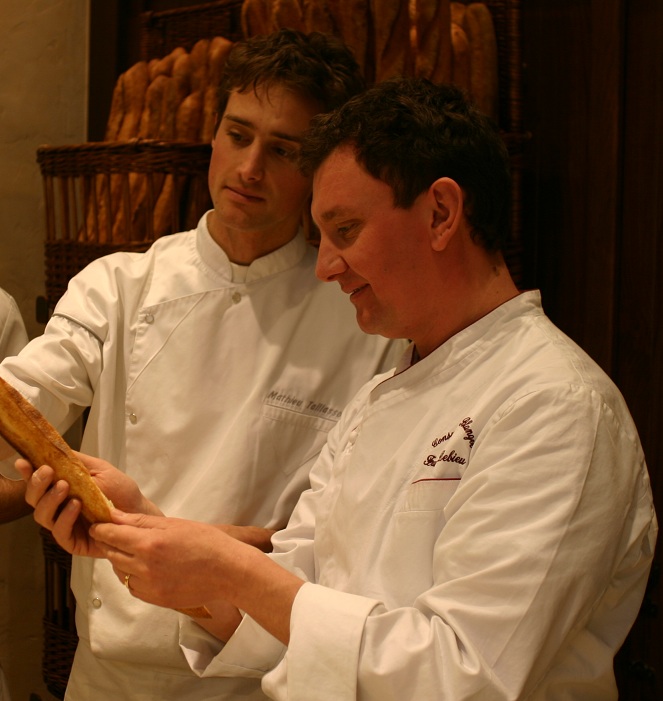