OK, so you’re interested in getting the most out of your wine. Perhaps you want to have a go at tasting some wines blind, or perhaps you want to maximize the expression of a wine to pair with your meal. What’s the first step? Well, to begin blind tasting, you need three things other than wine, a nose and taste buds: namely, an appropriate glass, a white background, and good lighting (you don’t need a blindfold – it’s hard enough as it is!). A classic ‘tulip’ shaped glass is ideal for tasting wine as it allows the aromas to concentrate at the tapered mouth of the glass.

An ‘appropriate’ glass – what does that mean? Surely any old wine glass will do? Well, any wine glass is better than a coffee mug, say, but a long-stemmed tulip-shaped wine glass is ideal for blind tasting. The reason behind the tulip-shape is to allow the aromas of the wine to develop and concentrate inside the glass without them escaping too much. This shape also lets you tilt the glass significantly to observe it without spilling the wine everywhere. The appearance of a wine in the glass gives away great clues as to the climate the grapes were grown in, the age of the wine, elements of the wine-making process and even the grape variety itself. It should thus go without saying that the glass should be clear. While a very few tastings use black glasses to obscure the colour of the wine, I personally don’t see the point and would certainly steer clear from the hideous coloured champagne glasses I’ve seen in department stores!

END_OF_DOCUMENT_TOKEN_TO_BE_REPLACED The artichoke above all is a vegetable expression of civilized living, of the long view, of increasing delight by anticipation and crescendo. No wonder it was once regarded as an aphrodisiac. It had no place in the troll’s world of instant gratification. It makes no appeal to the meat-and-two veg. mentality.–Jane Grigson Jane Grigson was an English food writer. Grigson’s growing interest in food and cooking led to the writing of her first book, Charcuterie and French Pork Cookery (1967), which was translated into French, unusual for an English food writer. Elizabeth David read the book and was impressed by it, and recommended Grigson as a food columnist for The Observer, for which she wrote a column from 1968 until her death in 1990. Salt is the policeman of taste: it keeps the various flavors of a dish in order and restrains the stronger from tyrannizing over the weaker.--Margaret Visser

Salt plays an important role in our daily life. Not only is it a vital substance for all living creatures, as it regulates the water content of our body, but it is also makes food taste better. Nobody can survive or cook without sodium chloride.

END_OF_DOCUMENT_TOKEN_TO_BE_REPLACED

Cultures all over the world and for thousands of years have developed fermented foods and drinks. Japanese miso, Korean kimchi, kefir from Eastern Europe and the Middle East, sauerkraut from Germany; yogurt, sourdough bread, and even chocolate are some examples. While scarfing down some quickly “pickled” carrots I had made, I thought, why not make real fermented vegetables? I have a penchant for salty, sour foods, so why not ferment a big batch of it? The nutritional value actually builds and multiplies in fermented foods. I would satisfy my cravings, indulge in a natural, traditional super-food, learn about an ancient practice, and have a project to boot.

To learn the scientific details behind fermenting, I picked up Harold McGee’s On Food and Cooking: The Science and Lore of the Kitchen. For fermentation how-to, I quickly found an article on Sandor Ellix Katz’s blog (who, before, helped my friends and I make cheese). For a fermentation step-by-step picture guide, I found Recipes from a German Grandma.

I wanted to settle the nagging doubt about using equipment no more advanced than big glass bowls picked up in a used goods store. Pickl-It jars, Harsch crocks , and other crocks aren’t found easily in Italy, my home-away-from-home, or if they were I wouldn’t carry them around on my back while biking from store to store in the sweltering heat. Ideally, I would use Pickl-It jars or a Harsch crock over my open crock method, because I’ve never fermented vegetables and believe I’ve already made a few mistakes (ahem…this I will find out in roughly two weeks). Small batches of fermenting veggies are prone to come into contact with air when using the open crock method, causing you to lose some of the precious little you’ve made.

I don’t know which I would choose over the other, but apparently there are Team Pickl-It and Team Harsch Crock sides to this debate.

Too late now. I’ll find out if my haphazard but enthusiastic open crock method works in about two weeks. That will be the turning point in my brief fermentation career in making a major decision: to buy or not to buy a Pickl-It jar.

Along with growing doubts as I read about fermentation, the more fascinating information I find. This post will be just the beginning of a short fermentation series that sort of follows along with my own method: dive right in knowing the basics, then nervously twist a strand of hair as I read more about it, then fixate on all things fermentation. Harsch crock. I didn’t have strong doubts about the open crock method. No one 500 or 2,000 years ago had Pickl-It jars or a standard Harsch crock. Unfortunately, and after I already had my kraut for a day and a half, the more I read about it, the more uncertain I’ve become. Sandor Ellix Katz’s directions seemed straightforward, but some other articles worried me.

Here are some other links I found useful:

Trieste holds a unique place in European history and culture. Next to the Balkans (5 km from Slovenia and 10 km from Croatia), a port built by the Austro-Hungarian Empire on an ancient Roman site, for a short time an independent principality, now part of Italy: the influences are many. It has a mini-culture all its own, with influences from all these countries and periods. You’ll see it in the architecture, churches, food, and, we heard it in the language and names of dishes and foods. The author James Joyce lived in Trieste for 15 years, partially to get away from the “crowd” and get some writing done, and partially to be near his writer friend, the Italian author, Triestine Italo Svevo, whose statue you will see in this photo documentary, and who some say served as a model for Joyce’s character Leopold Bloom in Ulysses.

You can either watch this as a slideshow, or if you want to see the full shot, just click on the photo.

10 rules that could be called Slow Food rules?

I discovered Ariane Grumbach on one of my favorite food sites, Larousse Cuisine. I’ve translated Grumbach’s 10 rules for eating à la française, adapting them slightly for a wider audience. 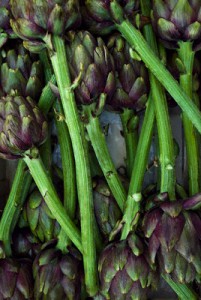 Dione Lucas was an English chef, and the first female graduate of L’Ecole du Cordon Bleu in Paris. Lucas was fundamental in establishing an unprecedented extension of the famous Paris Culinary School in London in the 1930s. She later wrote a book, the Dione Lucas Gourmet Cooking School Cookbook.