What better place to start an Epicurean Adventure than exploring the hub of any city — the food market.

Towns historically formed around the market centre. Farmers brought their produce to town to barter or sell, long before 20th-century industrialisation and long before we turned the fashionable 21st-century urban phrase ‘farmers’ market’. All around the world, food markets are still the bustling heart of local cuisine, and the best place to start your culinary holiday.

One of the best fresh food markets in Europe is the historic El Mercat de la Boqueria in Barcelona. Although the current market was built in 1836 on the site of a former convent, records show that there had been a market there since the 13th century. When visiting this market, the “must try” local specialty is the famous jamón ibérico de bellota, cured from noble, acorn-fed pigs. 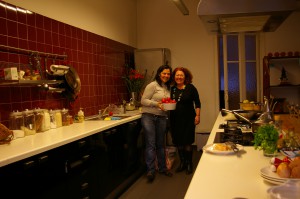 Cooking schools in Barcelona usually include a tour of this internationally renowned market. One such cooking school is Cook and Taste where you can learn to cook classic recipes, such as paella or crema catalana, the Catalan version of crème caramel, in a small hands-on workshop. Though it’s an extra, the market tour before the class really prepares you in understanding Catalan seasonal produce and specialties. While anyone can meander through the daily market without a guide, those extra tips you’ll gain when accompanied by a Spanish cook make your market experience even tastier. 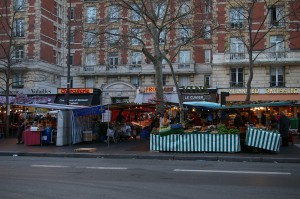 The open air food markets in Paris have been a tradition since the Middle Ages. Explore both Paris’ marchés volants — roving markets where the providores set up for a few hours in the morning on a specific day — and the Paris rues commerçantes or marchés permanants — the permanent market streets. The beautiful coffee table book Paris in a Basket Markets: The Food and the People (by Nicolle Aimee Meyer & Amanda Pilar Smith, forward by Paul Bocuse, published by Konemann) will transport you to Paris even when you’re back home.

Nagkcsarnok or Central Market Hall is the largest indoor market in Budapest, as well as one of the best places to eat. While it’s worth a visit for the architecture alone, there are plenty of culinary treats to explore. Seek out the paprika that has been stone-ground by hand. And barter for the best prices and more interesting produce in the outside aisles. 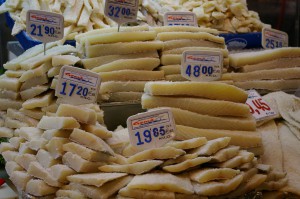 When visiting down under, the Queen Victoria Market, which has served Aussies since 1878, is now a tourist destination in its own right. Gourmet tours of the three main produce sections of the market are available: the Meat and Fish Hall, the Fruit and Vegetable aisles, and the Dairy Hall. If visiting Sydney, take the opportunity to visit the Sydney Fish Market, the largest seafood market in the southern hemisphere and the second largest for variety outside of Japan. The on-site Sydney Seafood School holds regular cooking classes and is a great way to rub shoulders with some of Australia’s best chefs.

Tsukiji Market in central Tokyo is the largest and best known fish and seafood market in the world. While the jonai shijo (inner market) is the licensed processing and auction area and out of bounds, the jogai shijo (outer market) is more accessible to tourists and houses retail as well as wholesale outlets. 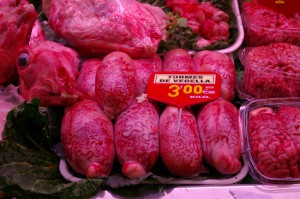 Food markets are a feast for the senses and a great way to learn more about the city you are visiting, its cuisine and its people. Which food or farmers markets have you explored on your travels? We’d like to hear about them. Drop us a line at rebeccavaridel@theramblingepicure.com.