Published by Jonell Galloway+ Tuesday, May 10, 2011 Permalink 0
Follow us! 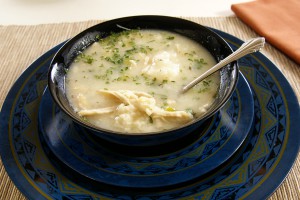 Deep inside me she remembers hunger.
She rejoices when I make stock—
the chicken already baked and eaten

returned to the pot—ribs ridged
like the roof of a cathedral.
I toss in potato peels, limp carrots,
old celery, herbs so dry they crumble.

Steam rises, more fragrant
than incense, and the long simmer
comforts her as no chant could.

Later I scoop out the bones
and vegetables, all their goodness
gone to broth. Golden,

fat shimmers on the surface,
the only gold she’ll ever know.
For now, it is enough.

Nan Fry is the author of two collections of poems, Relearning the Dark, and Say What I Am Called, a selection of riddles she translated from the Anglo-Saxon. Her poems have appeared in many journals and anthologies and in several textbooks. Relearning the Dark won the Washington Writers Publishing House competition in 1991. Her work has also appeared on posters in the transit systems of Washington, D.C., and Baltimore, Maryland, as part of the Poetry Society of America’s Poetry in Motion® Program. She teaches at The Writer’s Center in Bethesda, Maryland.