Yes, you might have noted my absence over the last month. I’ve been hanging out with my mother in Kentucky.

She is still hanging in there. Her body may be shrunken and “miniature”, like the workings of a fine Swiss watch, but her heart beats strong like an ox. I’m not sure she was aware when the clock struck Christmas this year. She had already stepped far into another world where one speaks in the King James Version. She talks to God all day. “God, please help me. God, I doeth love thee. ”

Often I climb into her bed and hold her, talking of the old days and saying, “You’re the best Mommy in the whole wide world.” She strokes my cheek, and says, “I love thee,” and stops talking to God for a short while.

Kathleen Finn pointed out this roundup of 2012’s Best Cookbooks: A Meta List of Listicles. It’s a nice, brief overview, so I thought I’d share it.

A recent post by my friend Tom Parker on his top wines of the last year inspired me to go through my notes to consider the same question. Wine tasting being the highly subjective and opinionated business that it is, it is nigh on impossible to narrow down a list of the best wines one has tasted in a year. Thus, I’ll go for the most enjoyable wines I can recall from the past 12 months to create my list of the top 10 wines of 2012.

Enjoyment of wine is predicated on many things other than the quality of the wine itself – the situation, the company, your frame of mind, for instance. And I’ve found that tasting great wines in a sterile, academic or commercial setting doesn’t really do justice to the mystic and sublime essence of a magical beverage. I’ve tried to take these factors into account in my list, as well as reflecting a range of styles and the locations I’ve visited throughout the year.

So, in no particular order:

A beautiful wine from a beautiful place. ‘The Contours’ is made from the best fruit in one tiny sub-plot from the Pewsey Vale vineyard high above the Eden Valley floor. 2006 was the most recent release at the time. Lively lime,  blossom and tertiary notes developing. Refreshing and elegant.

I love rich champagne styles and Bollinger is always a sure performer for me in this regard. The superb 2002 vintage brings even more leanness and length to this wine. Still a baby in drinking terms but very hard to resist!

Hunter Valley Shiraz is so unlike the jammy Barossan ‘fruit bombs’ that most outside of Sydney associate with Aussie Shiraz. It can be wonderfully complex, earthy and Hermitage-esque. ‘The Graveyard’ is one of the best, and it was a rare privilege to taste such a great wine at an age it deserved to be drunk.

Tiny amounts of this wine are made from one of the oldest plots of vines remaining in the world. 1843 refers to the year of planting. This wine is nothing like any Barossa Shiraz I’ve ever tasted. Incredibly concentrated and animally. Far too young at three years old, but an amazing wine to experience nonetheless.

Rounding out a trio of Shiraz/Syrah: I showed this wine at a recent tasting in Oxford and was mightily impressed by its length, complexity and great value for money. Drinking very well now.

The most enjoyable barrel sample I’ve ever tasted. The wine had been blended from the individually-aged parcels and was into its second round of oaking. Incredibly taut, balanced and complex. Brimming with potential.

During a trip to Bordeaux over the summer, Phélan stood out for their hospitality, their obvious attention to detail in the winery, and their delicious wines. We were so impressed that a friend hosted a mini-vertical of Phélan later in the year. The ’96 was the most mature, complex and enjoyable of these, although many of the other vintages will get there in time.

One of the most astonishing dessert wines I’ve ever had. Pulled completely out of the bag during a visit to the charming Hugel property in Riquewihr. Endless length and complexity and a beautiful balance between sweetness, acidity and the perceived dryness all great dessert wines get with age.

A fascinating and unusual wine. Marie-Thèrese Chappaz makes extraordinary wines from her vantage point in some of the world’s steepest vineyards overlooking the Rhône River in Switzerland. This wine is mostly Marsanne, from gnarly 90-year-old vines (with a good claim to being the oldest in Switzerland), and spends 18 months in barrel. Still too young, but it’s so hard to get your hands on a mature example of these wines — they are all sold in person every year in May at the winery!

The Lane Chardonnay 2009. Adelaide Hills, South Australia. Delicious Chardonnay with judicious and balanced use of oak. Went with a delicious lunch at the winery.

McGuigan Semillon Bin 9000 1997. Hunter Valley, NSW, Australia. Hunter Valley Semillon is certainly one of Australia’s great gifts to the world of wine. Lovely to taste one with significant bottle age to bring out the subtle tarragon and nutty notes.

Duas Pedras 2009. Alentejo, Portugal. Touriga Nacional blended with Syrah, this is a powerful, rewarding wine that needs decanting in advance and has become one of my staple reds.

I hope you all have a wonderful Christmas and holiday season with plenty of good cheer and fine bottles. I’m not yet sure what I’ll be drinking on Christmas Day, but I have a feeling I’ll stick to my favourites: something French, something Kiwi, something sparkling, something Pinot…

James Flewellen is The Rambling Epicure wine columnist. James is a biophysicist at the University of Oxford. Originally from New Zealand, the huge range of wine James discovered in Europe spurred his interest in all things vinous. He became involved in the University’s Blind Wine Tasting Society and has recently completed a two-year term as its President. During this time he represented the University in a number of domestic and international wine tasting competitions, winning several awards. He is currently completing the WSET Diploma in Wine and Spirits. James has a passion for wine communication and education and runs the Oxford Wine Blog and the Oxford Wine Academy.

The Perfect Last-minute Gift for the Foodies in your Life

Meeta Khurana Wolff, a professional food photographer and stylist, and ongoing contributor to this site, will be holding a Supperclub food styling and photography workshop in London in the U.K. from February 15-16, 2013, along with Sumayya Jamil, and special guest Jeanne Horak-Druiff, at the Central Street Cookery School. Click here for more details and to reserve. Only 12 places available.

One should never think that everybody in Switzerland eats the same thing for Christmas dinner. With four languages and a multitude of “mini-cultures” tucked away its various mountain niches, and with a huge international population, Switzerland may well have more Christmas menus than any other country in the world.

What’s so special about a Longeole?

Many Genevois eat a sausage specific to Geneva called longeole. Every region and many villages have their own sausage recipes, but the longeole is quite apart from the others for several reasons.

For one thing, it contains not only ground pork but also ground pork rind. This keeps it from drying out and gives it fuller flavor. The other, and quite major, difference is that that it is speckled with fennel seeds, probably a Savoyard influence.

Any good local butcher makes his own longeole. If not, it is advisable to find one who does. It’s Christmas, so you want to be certain it’s of good quality.

Longeole is easy to cook, but you must allow yourself enough time. It takes longer to cook than other cooking sausages because of the addition of the pork rind, which is harder than simple ground pork.

Use a soup pot tall enough to hold your sausage. Fill with water and bring water to boil. Add a touch of salt. Drop in sausage, lower heat, and let it simmer for 2 hours 45 minutes or 3 hours. The water should be just on the verge of boiling during the whole cooking time. It is then ready to slice and eat.

Some cooks prick the Longeole with a fork before cooking, but purist that I am, I think you risk losing some of the juices, which would take away from the flavor and make the sausage less succulent in the mouth. It is also important not to let it boil, because this too will dry it out.

What do Genevois eat with Longeole?

Like everywhere, different families have different traditions, different favorites, but the most common accompaniments are potatoes cooked in white wine, lentil stew and cardoon gratin, all Geneva specialties as well.

END_OF_DOCUMENT_TOKEN_TO_BE_REPLACED

In A Geneva Christmas: Longeole sausage, I think I got your mouth watering talking about longeole, or fennel seed sausage. But did you see the potatoes in the photo? That’s THE essential side dish: potatoes cooked in broth and white wine.

I translated and adapted this recipe from A la mode de chez nous, Plaisirs de la table romande, a book on cooking in French-speaking Switzerland, by M. Vidoudez and J. Grangier.

Fennel-flavored Longeole sausages for Christmas, made by Jacky Bula butcher in Geneva

Cooking notes:  I use a Kuhn Rikon Durotherm to maintain the vitamins and decrease cooking time. This also allows you to use less liquid, which gives a more intense flavor. In this case, you would use just enough broth to cover the potatoes.

END_OF_DOCUMENT_TOKEN_TO_BE_REPLACED

Click here to find the best in current food news and trends in the world of real food, Slow Food and mindful eating.

Interview with Sihi of food blog 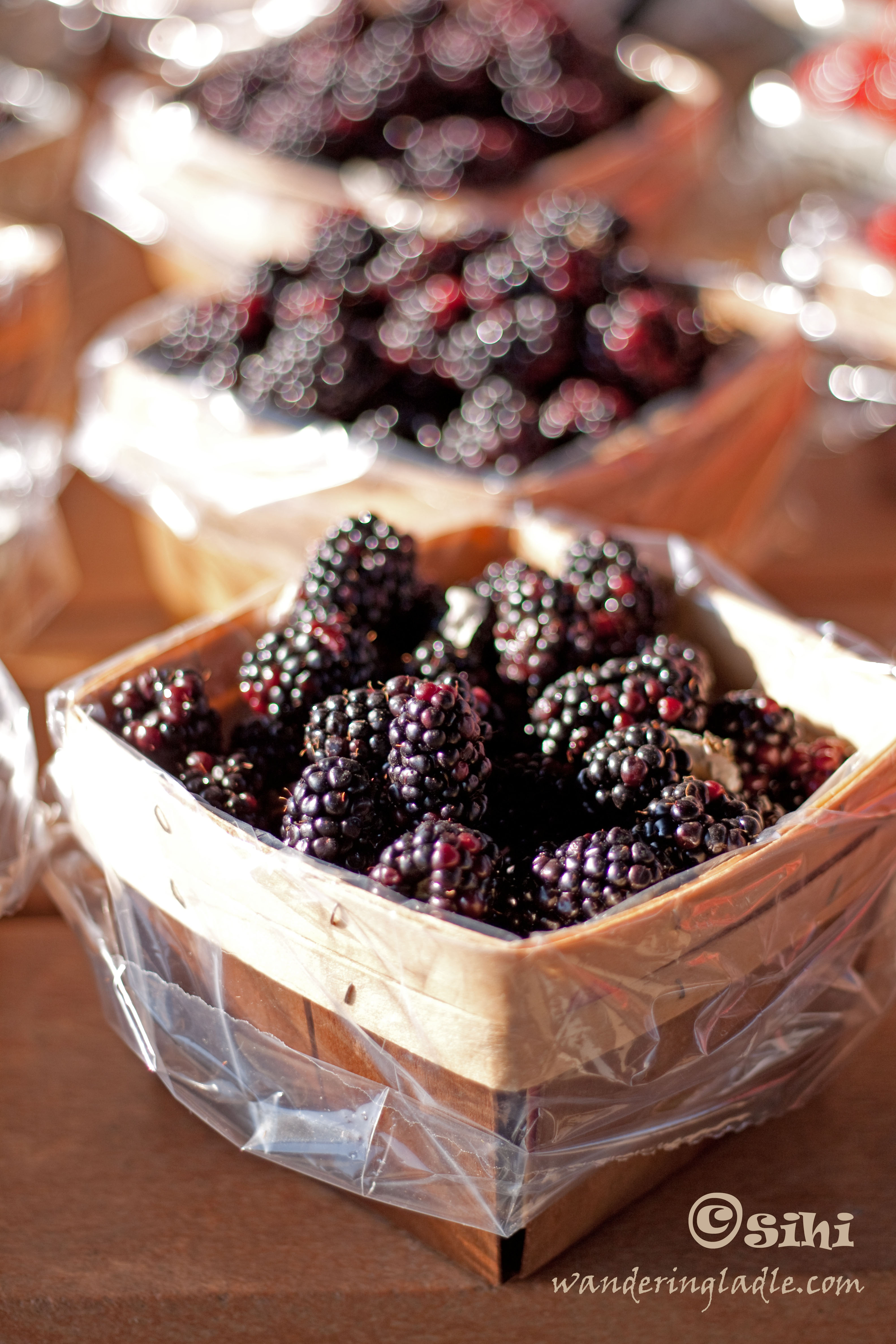 I am a complete amateur when it comes to food and photography. I am learning! And each day has gone by learning something new, thus far.

My entry into the world of food blogging was when I started documenting recipes at my pint-sized food blog. After blogging on and off for about two and half years, I took a break to enjoy time being a new mom.

END_OF_DOCUMENT_TOKEN_TO_BE_REPLACED

Sandeea is our latest food photography discovery. A woman of many talents, she is also author of the Food Play column. She writes in both English and Spanish and runs the Spanish food blog La Receta de la Felicidad.

The Big Apple on a Budget: Celeste, a New York Restaurant Review

Celeste, located on Amsterdam Avenue between 84th and 85th, in New York, is one of my favorite places when I’m facing a cash squeeze. Thanks to the excellent value it offers, as well as the authentic Italian food it serves, it has deservedly become a popular fixture in the neighborhood.

After being greeted by the owner, you are taken to your table and presented with fantastic Italian bread and extra-virgin olive oil. The antipasti range from Fegatini Di Pollo (chicken livers) to Saute Di Cozze (sautéed clams) to Crostini Con Alici (breadsticks wrapped in anchovies), and my personal favorite, the Involtini De Melanzane, consisting of eggplant rolls stuffed with prosciutto and pecorino cheese baked with tomato sauce.